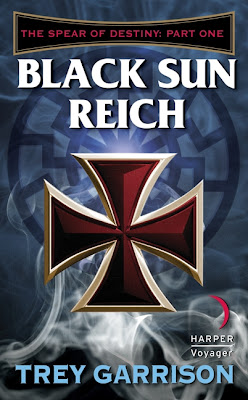 The Spear of Destiny: Part One:
Black Sun Reich
by Trey Garrison


Black Sun Reich: Part One of three in The Spear of Destiny, the first novel in a new steampunk, horror, alternate history, action-adventure series set in a 1920s where the Nazi’s have begun their subjugation of the world using the occult, advanced science, and a holy relic with awesome powers.

And don’t miss the other parts of this serialized novel - Part Two: Death’s Head Legion and Part Three: Shadows Will Fall.

Trey Garrison recaptures the unapologetic adventure, wonder and excitement of the classic pulp fiction of the 1930s and 1940s, blending elements of steampunk with deeply-researched historical fiction and a good dose of humor. The novel also explores major philosophical and moral issues relevant to our contemporary world: the trade-off between security and liberty, the morality of pre-emptive war, and what fundamentally separates good from evil.

The North American continent is made up of several rival nations, and a Cold War is building between them. The Nazis rose to power a decade earlier. People travel by airship and powerful organizations calculate with Babbage’s Difference Engine. The Nazis have hatched a plot to raise a legion of undead soldiers.

Enter Sean Fox Rucker, Jesus D’Anconia Lago, two Great War veterans and freelance pilots who are pulled into the quest. They are joined by a brash Greek merchant, a brilliant Jewish cowboy, and the woman who once broke Rucker’s heart. This ragtag band of reluctant, bickering, swashbuckling heroes soon is locked in a globe-spanning race against Nazi occultists, clockwork assassins, and a darkly charismatic commando. In a world where science and the supernatural co-exist, and the monsters of legend are as real necromancers who summon them from dark realms, our heroes alone stand before the rising darkness. But all their efforts may not be enough.

Trey Garrison begins his story with a violent scene in a Vatican cathedral where we meet the frightening, Der Schadel, also known as The Skull, and his team of Nazi storm troopers. The group is after the spear of destiny, and they aren’t the only ones who want their hands on this powerful blade. Texan pilot, Sean Fox Rucker and German physician, Dr. Deitel, are an unlikely duo working together against the Nazis, but the pair work well together. They also team up with a handful of other vibrant characters who are out to stop the Germans from unleashing an unstoppable darkness across the world.

Rucker is my favorite character in the novel because he is confident, tough, witty, and loyal. I enjoyed the humor that floats between him and Dr Deitel. It’s a nice break from the slaughter of violence that the Nazis are lashing out as they rip through lands in search of the spear of destiny. I feel Garrison was successful in creating a fictional world set in the 1920s with issues that are parallel to our past and present day. Black Sun Reich delivers enormous amounts of action, horror, and humor. I am eagerly awaiting Book Two in the The Spear of Destiny Trilogy.