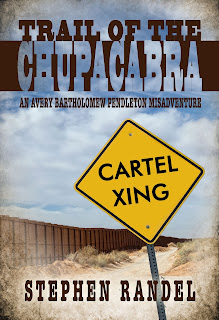 Avery Bartholomew Pendleton is back, and he’s just as crazy as ever. Avery is a paranoid loner obsessed with global conspiracy theories who spends most of his time crafting absurd and threatening letters to anyone who offends him. That means pretty much everyone.

Still convinced of the existence of the mythical Mexican chupacabra*, Avery enlists the assistance of the Southwest Texas Revolutionary Armed Confederate Border Operations Militia (STRAC-BOM) and their manic leader, General X-Ray, to help him invade Mexico. Accompanied by Ziggy, a burned-out hippy, and an uncommonly large iguana named Nancy, the group follows the advice of a New Orleans voodoo priestess and heads straight into the Mexican desert.

Unfortunately for the motley gang of explorers, Mexico can be a dangerous place if you cross the wrong people -- specifically, the Padre, a vicious drug cartel boss, and El Barquero, a murderous gunrunner who has crossed Avery’s path before.

What unfolds is a laugh-out-loud dark comedy of insane humor, unforgettable characters, and chilling thrills.

*No chupacabras were injured in the writing of this book.

Stephen Randel did not disappoint with his sequel to The Chupacabra. I didn’t realize how much I missed the flamboyant character, Avery Bartholomew Pendleton. Avery has not given up on his quest of locating a mythical chupacabra and has Ziggy (the bunt out hippy with a soft heart) as his faithful sidekick. While the two decide to head back to Mexico in search of the chupacabra (thanks to Mae Mae’s spiritual guidance), ex-cartel, El Barquero is already there in search of vengeance for his dead wife and unborn child.

I applaud Randel for his ability to give readers a laugh out loud dark comedy, while
simultaneously balancing an adventurous thriller. Some favorite characters from book one can be found in the middle of the action, such as the civilian militia, Southwest Texas Revolutionary Armed Confederate Border Operations Militia (STRAC-BOM). As for new characters, I enjoyed the fierce Esmeralda.

If you want a story that will cause you to laugh a lot, sit on the edge of your seat in anticipation of what will happen next, and a colorful cast of characters, then Trail of the Chupacabra is a must read. There are violent scenes throughout the story, but I wouldn't expect anything less from the viscous cartel.

Stephen Randel, CFA, was born in Houston, Texas. He is a graduate of Texas Christian University. Steve now lives in Minneapolis, Minnesota with his wife and their two rescue dogs.

Posted by Sage Adderley-Knox at 9:44 AM
Email ThisBlogThis!Share to TwitterShare to FacebookShare to Pinterest
Labels: Book Reviews